Emotional ranges: a way to think about empathy

Let’s break down empathy. At its core, it’s the ability to truly place yourself in someone else’s shoes. Not just imagining what it would be like. But actually lacing up their boots, finding an irritating rock in the left one, and then running three marathons in two days.

Given this lens, a way to “build” empathy is to wear as many shoes as possible. Or as I like to view it, expand my “emotional range.” 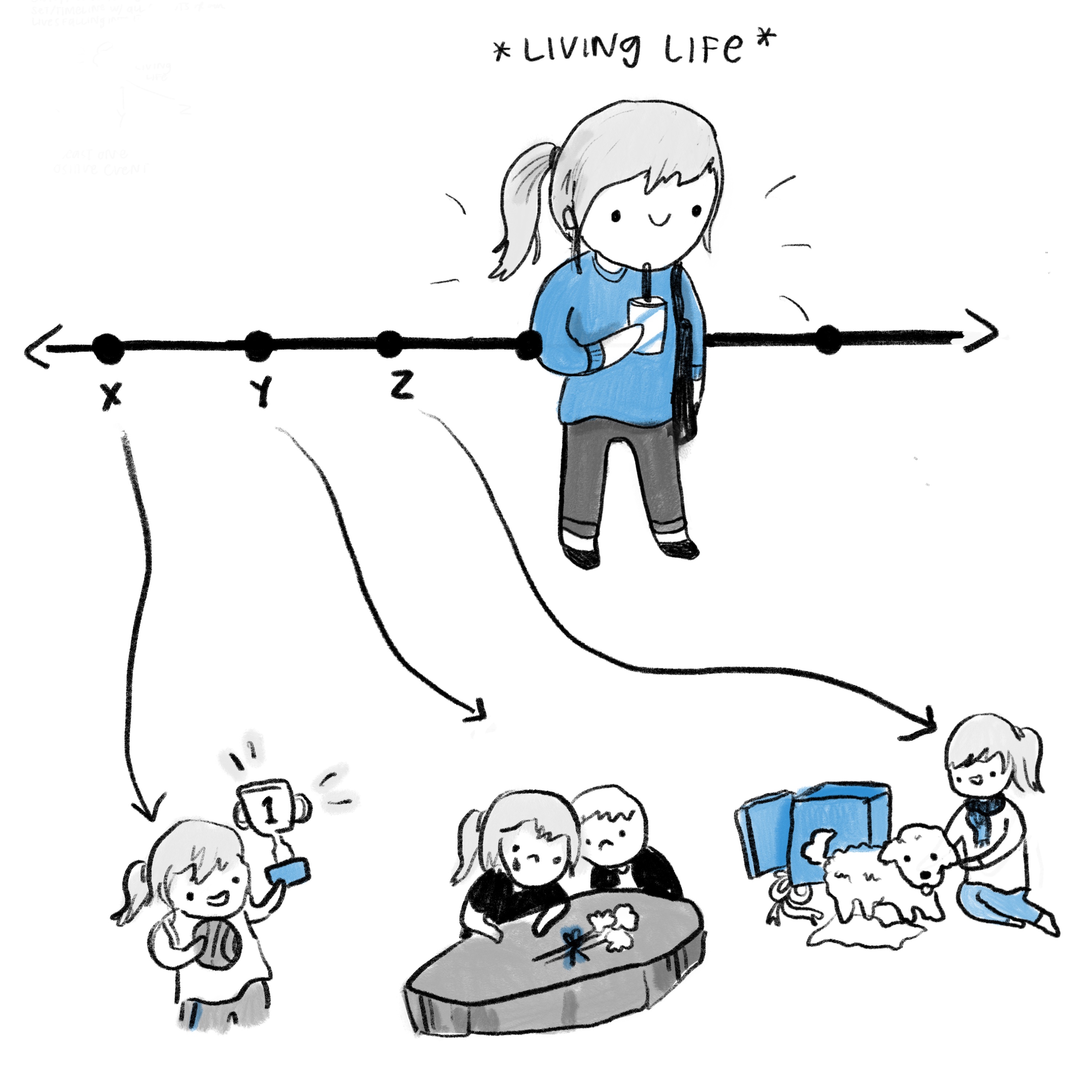 Imagine plotting all of life’s events onto a range. A championship win might be on the far left, the heartache of losing a loved one towards the middle, and the nervousness and overwhelming excitement of becoming a dog owner farther down. Each point on this range is incomparable—time may be linear, but our memories aren’t—and serve as reminders of experiences previously weathered. The low points in life are hard, there’s no glossing over this. On top of that, the usual advice around the struggles we face is extremely lossy (especially related to mental health). Someone else’s experiences can rarely be communicated in enough detail to provide useful advice for another’s situation.

We all carry similar invisible wounds and this model provides a natural metaphor for empathy as the intersection between people’s emotional ranges. Which begets the following questions: “How do we ‘reveal’ our ranges?” and “Aside from direct experience, is it possible to venture outside of our range?”

Before diving into intersections, I want to qualify1 that experiencing an event, say X, doesn’t imply the ability to empathize with the actual experience of X in other people’s lives. It only constructs a frame of reference as a basis for connection. There will always be work required to meet one another in that frame. Put simply, covering the same “trail” doesn’t account for the journey beforehand, how much of a load we’re carrying, and how far away our respective destinations are. Context matters.

Limitation of empathy: by putting your (limited) perspective in someone’s shoes, you might arrogantly trample over their actual experience.

Is it possible to gauge the “similarity” of our emotional range to another’s? I believe so. While the motivation behind this question isn’t to produce a statistic, there is a useful analog in mathematics: Jaccard indices.

Given two sets of elements, their “similarity“ can be measured by the ratio of the intersection and the union. The more the two sets have in common, the more alike they are—which makes “Jaccard indices” sound like a ten dollar word for a ten cent idea. In terms of emotional ranges, the more experiences you have in common with another, the more likely you’ll have opportunity to hold space, understand their pains and joys, and truly meet them where they’re at. Ironically, this is usually the reason why the “most positive“ folks aren’t great at empathy2. 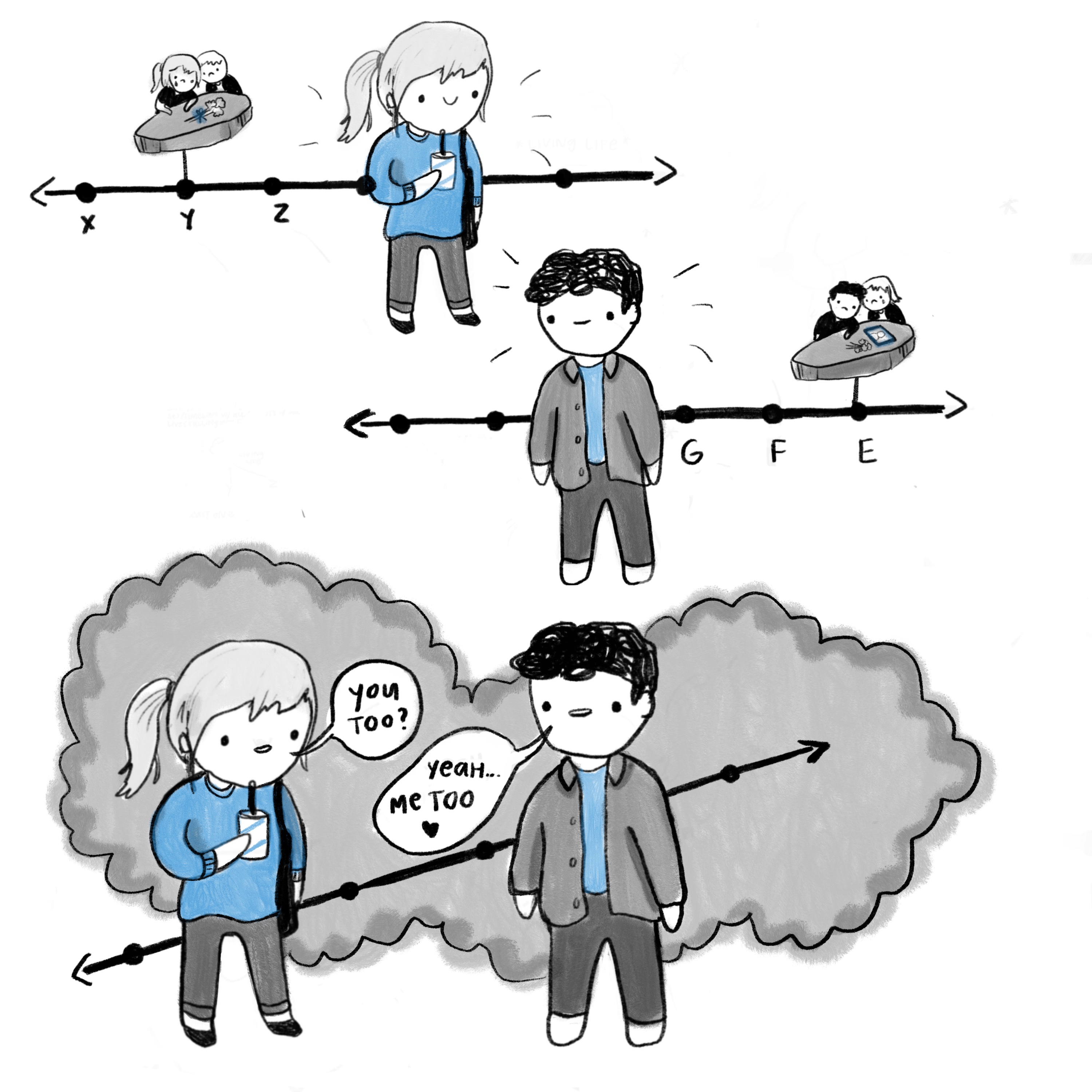 Jaccard indices can measure how much we have in common. But, to make this possible, we must color in the invisible wounds to “reveal” our ranges. There are a few a ways to do this and vulnerability seems to be the frontrunner.

Crafting spaces which foster vulnerability allow us to lower the guard on our emotional ranges. Mentioning that I struggled to keep up with work, battled a major surgery, and still second guess whether or not the words you’re reading on this site are even worth writing have all been leaps of faith that turned acquaintances into some of my closest friends.

Communities which thoughtfully consider psychological safety give rise to moments of vulnerability which, in turn, help reveal ranges. It’s no wonder that when you meet someone from such a group something clicks. For me, The Recurse Center, Above & Beyond’s Group Therapy, and XOXO have all been examples. Multiple New Yorkers—we’re notorious for rarely deviating from our beelines—have gone out of their way to say “hi” when I wear clothing that bears RC, ABGT, or XOXO’s logos. These groups have provided me and countless others with precious, shared experiences, and it’s exciting to meet someone who knows.

2/ So far, I’ve had this experience with the following groups:

It’s important to remember that vulnerability, while tender and well-intentioned, comes with a bill of emotional labor for those holding space and revealing their range. I’ve seen this bill handled extremely well by two close friends, Leo and Casey. During facilitated, group discussions, they would preface with the fact that just because someone feels comfortable sharing in a group setting, doesn’t mean they’ll feel the same one-on-one (and vice versa for those listening). It’s helpful to be mindful of these “vulnerability equilibriums” in conversations with others.

Venturing Beyond Your Range

After thinking about emotional ranges, their intersections, and how to reveal them, I’ve started to wonder about ways to venture beyond our ranges. There is no substitute to direct experience when it comes to empathy, but catalysts seem to exist.

Reading fiction can provide an unbiased lens into other walks of life by bypassing our preconceived notions. The main character in a fiction novel may face similar struggles to an analogous demographic in our world, but since they’re presented in a fabricated context, it’s less likely that our minds will jump ahead of the narrative and instead be present with the character page by page.

As David Smith, neatly put it: “localization and accessibility […give] you a glimpse of the nigh-infinite variety of humans.”

The groundwork for these two aspects of product development are almost always worth baking in early. Accessibility also has an added benefit of not only helping target populations, but it often makes experiences better for our current and future selves.

Assembling a Diverse Set of Colleagues, Friends, and Mentors

We can almost view the collective empathy of a group as the aggregate of its members’ emotional ranges. It immediately follows that more diverse teams build better products3. This can be applied on a personal level too. By surrounding yourself—both physically and digitally—with colleagues, friends, and mentors from a breadth of races, ethnicities, gender identities, gender expressions, sexual orientations, physical abilities, physical appearances, socioeconomic backgrounds, educational backgrounds, nationalities, ages, religions, and beliefs (to name a few), it’s possible to venture outside of your range. While Twitter receives a lot of rightly-deserved flak for no longer harboring a safe space for those in the minority of the aforementioned dimensions, it has the power to enable users to be deliberate about the metaphorical “rooms“ they place themselves in, for better or for worse. On the worse end, the “room“ is filled to the brim with similar walks of life, reinforcing confirmation bias. On the better end, it’s a wonderful educational tool in cultivating empathy.

There’s a common adage stating “you’re the average of the N people you hang out with.” I think this should be refactored a bit:

You’re the average of the N people you hang out with…and those N should span walks of life unlike your own.

Life has a funny way of interjecting the highs and lows. While social media encourages editing out the “lows,” there’s value in remembering that they contribute to our emotional range. Expansions of this range—and the basis for empathy it provides—have been the stems for some of my most-cherished friendships. Vulnerability can shed light here in uncovering intersections with one another. I think about this a lot. From time to time when riding the subway, I’ll look around and soak in the metropolitan silence. Each rider with an infinitely complex story and emotional range that has shaken out from it. We’re all veterans of our own lives, decorated with invisible badges of honor from the experiences we’ve endured. Maybe empathy is remembering that.

Special thanks to Emily for the illustrations and Eric, Shiva, and John for feedback on early drafts of this entry.