There’s no dancing around it—we all have a finite number of heartbeats, breaths, and seconds on this planet (and maybe Mars). However, the curious thing about time is its elastic nature. Never-ending high school summers. Days so long they had seasons. One-on-ones that stall when you ask for a raise. Assuming we’re not moving near the speed of light, time marches forwards at a constant rate—it’s our perceptions of it that change. I’ve become fascinated with ways to slow down this perception.

We’ll cover three aspects that appear to be at play: new experiences, busy minds, and tempo.

When everyday routines aren’t punctuated by experiences like travel, meeting new people, or novel tasks, we shift into autopilot. We’ve all been there. A friend will ask how your week went and, after pausing to reflect, the past few days resemble a blurred stretch of time. This dynamic is typically attributed to spending time in “System One” of thought. Daniel Kahneman presents the duality between System One and Two in the notorious tome: “Thinking Fast and Slow.” At a high level, the first mode is reserved for low-energy cognitive tasks; those that are “fast, automatic, frequent, emotional, stereotypic, or unconscious.” Examples include commutes, performing pre-computed arithmetic (10 * 10 = ?), or finishing trite phrases (“To be, or…”). The second mode is more effortful and conscious. Newer experiences, performing an unfamiliar exercise, or following a math proof all land in this bucket. These modes have a powerful effect on our perception of time. It seems to contract when the unconscious thoughts of System One string together; conversely, the neurogenerative nature of System Two makes us more aware of the gaps between thoughts, dilating that perception.

The awareness of gaps in thought brings us to the next topic—how busy our minds are.

I firmly believe that a busy mind accelerates the passage of time. Constant context switching, obsessive rumination, and other forms of mental load not only shorten the space between thoughts, but also inhibit our capacity for originality. How do we remedy this? The answer might involve allocating uninterrupted spans of time to experience boredom, let the dust in our minds settle, and get into flow.

Boredom hit hard during my first, week-long, silent retreat. I hesitate to include this anecdote, since describing the experience might alter my relationship with it. But, I aim to honestly distill it here in the hope that it helps folks like me, whose insatiable information diet has made boredom a privilege.

Seven days without reading, writing, speaking, or direct eye contact (one of the retreat rules) made me realize how rarely I get bored during everyday New York Life. It got to the point where I would take longer showers just to read the label on my shampoo bottle—yikes. Around the third day, I began shifting my appetite for mental stimulation towards paying attention to what was around me. I vividly remember spending 45 minutes staring at a tree on Wednesday evening. My focus wandered from root to leaves and back in some sort of mental Brownian motion. The remainder of the retreat contained the slowest days of my life, in the most palatable sense. I was reminded that time moves at a glacial pace when we’re present to soak in the world around us.

This isn’t to say we should be present at all times. Going on autopilot during commutes or chores lets us to deploy our attention towards experiences we want to magnify.

Tempo has a relation to time in a couple of domains: music and clocks.

Music backgrounds the entirety of my days. Between wearing headphones at work to turning on speakers at the apartment, I’m constantly listening to house and trance. These genres are marked by differences in beats per minute (bpm) ranges with house clocking in at 120–130 bpm and trance at 110–150. This got me wondering if bpm ranges impacted time perception. After asking on Twitter, I was pointed to a study from 1998 on tempo and time perception in a gymnasium setting (emphasis mine).

“Fast or slow music was played in [a] gymnasium [for] two consecutive days, and as [the participants] left, [they] were informed of their time of entry and asked to estimate the present time. The results showed that musical tempo did not influence time duration estimates in any one particular direction, but that slow music led to a greater degree of inaccuracy in estimations than did fast music.”

Despite a lack of influence between tempo and time duration estimates, I’ve felt the observed inaccuracy when going to slower house music concerts. I’ll often find myself checking my watch not out of habit, but because my internal clock and wall time have fallen out of sync.

Tempo is also embedded in the measurement of time itself. A few alternative approaches to clocks have side effects on time perception.

The Chromachron is a physical manifestation of synesthesia. Opting for “Color Time”—a literal translation of Chromachron—the “anti-stress watch is praised for its inability to display the exact time.” 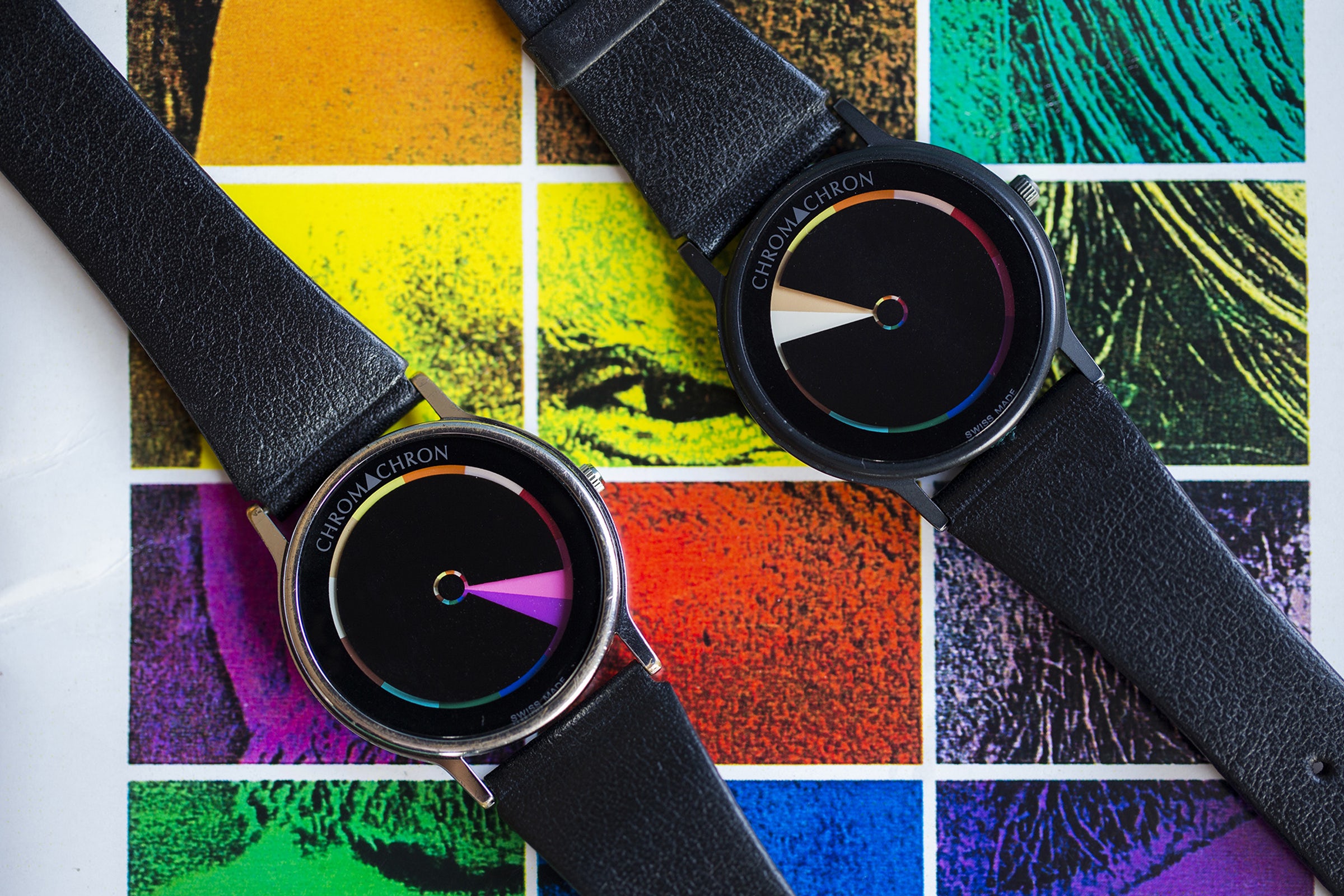 “Two Chromachron watches over the 1976 booklet ‘The Story of Color Time.’” Image credit to HODINKEE.

The watch face is split into a dozen colors, proxying the “illumination and energy” of each hour. Its black center slows the tempo of our perception by providing an hour-wide slice into the current time. Instead of seeing the minutes or seconds pass by, we can only perceive subtler shifts in color—making me curious if these widened intervals trigger the tendency towards inaccurate time estimations shown in the gymnasium study.

Chromachrons are hard to come by. So, I’ve tried to approximate its relaxed approach by customizing the faces on watchOS. Explorer, Hermès, and Utility are some examples with configurable hour increments.

Just as avid enthusiasts wear a weekend watch, I’ll usually swipe over to a less fine-grained setting on Saturdays and Sundays—fading the precision of 1:24pm to “an afternoon coffee in Madison Square Park.”

While the Chromachron has 12 colors, it still folds a calendar day into “a.m.” and “p.m.” I’ve tried switching to military time and it allowed me to better grasp the length of a day. The division, modulo 12, provides a two-beat tempo for the hours in a day—which could shorten our time perception. There’s a palpable length of time that using “13” over “1 p.m.” conveys. The rest of the world probably made the right call on this format.

What if we threw out clocks altogether? Doing so would certainly be utopian and make coordination nearly impossible. Still, I believe there’s a case for regimenting stretches of time to not know what time it is. I honestly can’t remember the last time I went an entire day without seeing a clock of some sort. David Cain meditated on this in his “Case For Not Knowing What Time It Is.”

“There’s a […] psychological cost to constantly learning what time it is. Whenever we see the time, we often can’t help but remember our whole basket of obligations and goals, and wonder how we’re ever going to fit them all together. And how often do we feel completely confident in our ability to do that?”

A perfect congruence between tempo—or lack thereof in Cain’s case—and our perception of time probably doesn’t exist. In fact, tempo is so important for humans that we ritualized weekdays. Yet, we can still be deliberate in picking intervals to maintain a healthy relationship with the abstract grid that overlays existence.

Our tour of new experiences, busy minds, and tempo has shown that the escalator of time already moves slowly—we’re the ones sprinting up it. Perhaps, slowing down time means finding a tempo that provides just enough routine, while allowing us to notice the infinite, green glow between the gaps of that escalator. After all, our perception of time is the sum of these gaps.

Special thanks to Shiva for feedback on early drafts of this entry.

⇒ “Walk on the Other Side of the Street”

⇒ “What Boredom Does to You”