A CT and F(R)P Diary - Archive

01 Jan 2020 When I was first introduced to adjunctions, I reacted in the way Spivak anticipated during an applied category theory lecture (timestamped, transcribed below).

…and when people see this definition [of an adjunction], they think “well, that seems…fine. I’m glad you told me about…that.”

And it wasn’t until I stumbled upon a Catsters lecture from 2007 (!) where Eugenia Cheng clarified the intent behind the definition (and contrasted it to isomorphisms and equivalencies).

To start, assume we have two categories C and D with functors, F and G between them (F moving from C to D and G in the other direction).

There are a few possible scenarios we could find ourselves in. 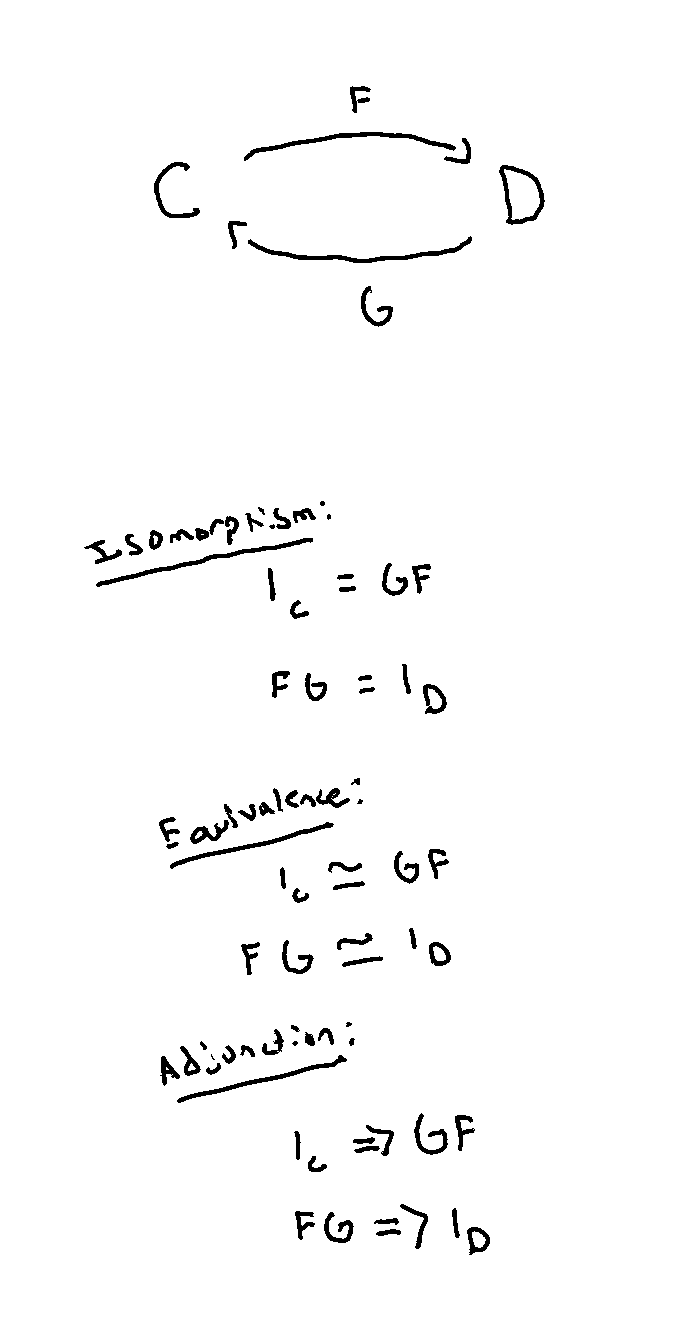 Moving between the scenarios, there’s a sort of “relaxing” of strictness:

15 Dec 2019 The better part of my weekend was spent reading Chris Penner’s incredibly well-written Optics by Example and attempting the exercises with BowOptics.

I’m early in my learning. Still, I wanted to note the motivation behind optics.

They seek to capture control flow, which, is usually baked into languages with for, while, if, guard, switch, and similar statements, as values.

In the same way that effect systems capture effects as values—decoupling them from execution—optics separate control flow when navigating data structures from the actions taken on them.

Sara Fransson put this well in their recent talk: Functional Lenses Through a Practical Lens.

Noticing that optics excite me much like FRP did back when I first learned about it.

And I haven’t even gotten to the category-theoretic backings yet.

(Attempts to contain excitement. Back to reading.)

13 Dec 2019 A few weeks back, Jordan Morgan nerd sniped me1 into writing a Combine analog to RxSwift’s ObservableType.merge(sources:)—an operator that can merge arbitrarily many observable sequences.

Here’s a rough, not-tested-in-production sketch (if you know a way to ease the eraseToAnyPublisher dance, let me know):

And in writing this entry, I decided to check and make sure I wasn’t missing something. After all, it’s odd (pun intended) that the merging operators on Publisher stop at arity seven. 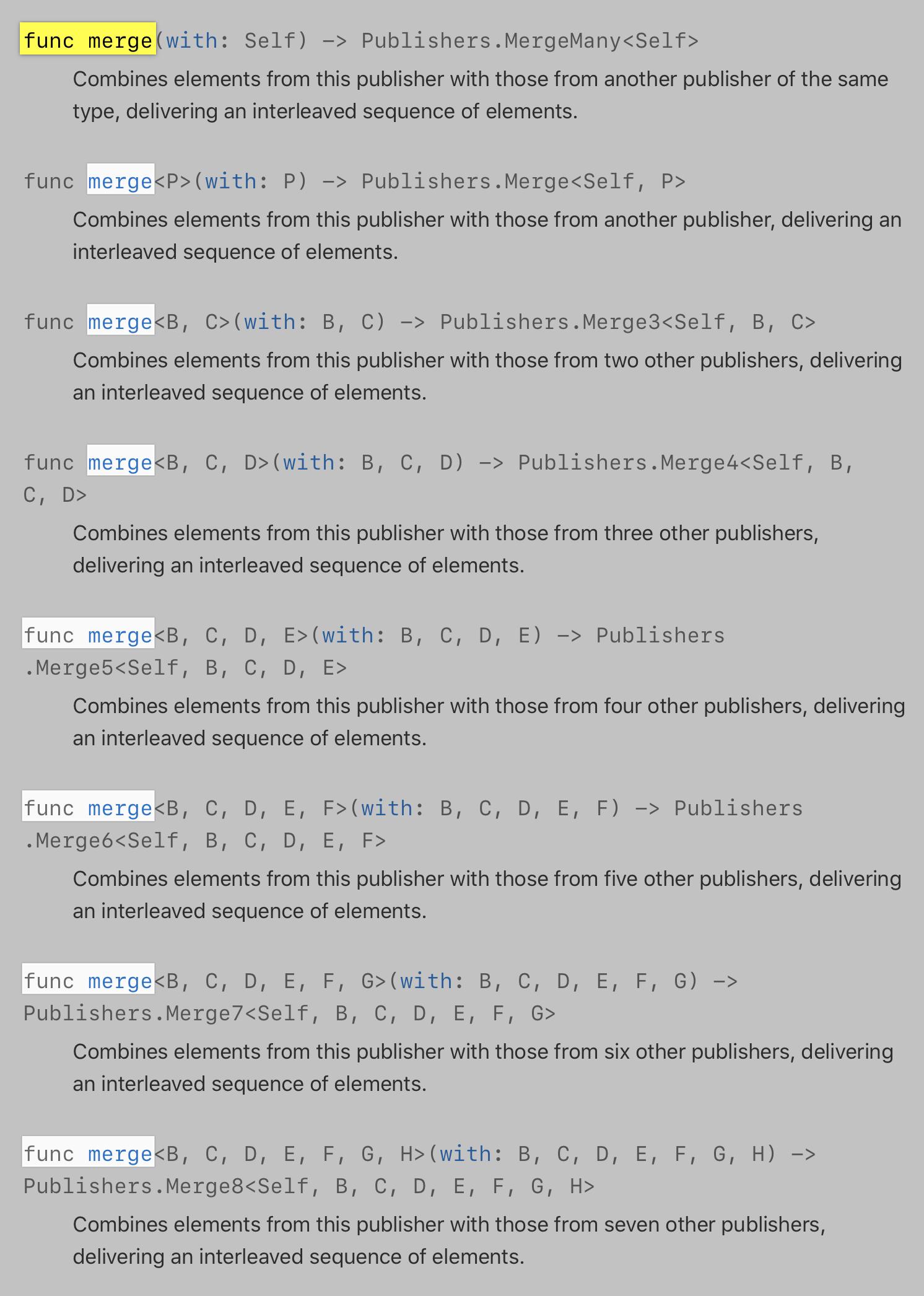 Then, I noticed the Publishers.MergeMany return value on the first and, below the (hopefully temporary) “No overview available” note on its documentation, there’s a variadic initializer!

So, there you have it. TIL merging a sequence of publishers goes by the name of Publishers.MergeMany.init(_:).

Visually, the diagram formed by functors F and G between C and D and with natural transformation α must commute (signaled by the rounded arrow in the center). 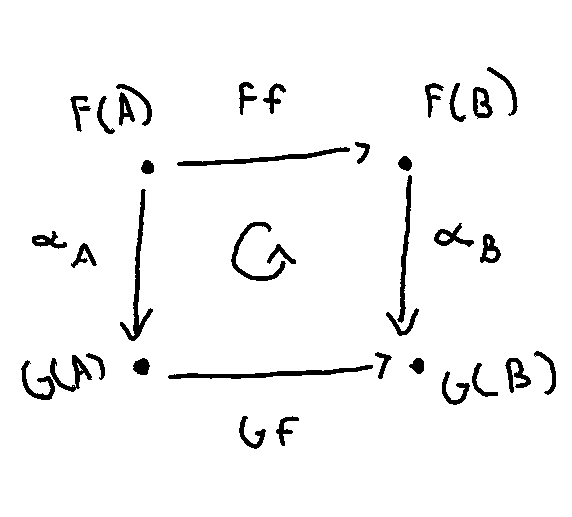 I’m trying to get a sense for why this condition is “hard” to meet.

What’s helped is making the commutativity explicit by drawing the diagonals and seeing that they must be the equal. The four legs of the two triangles that cut the square must share a common diagonal. 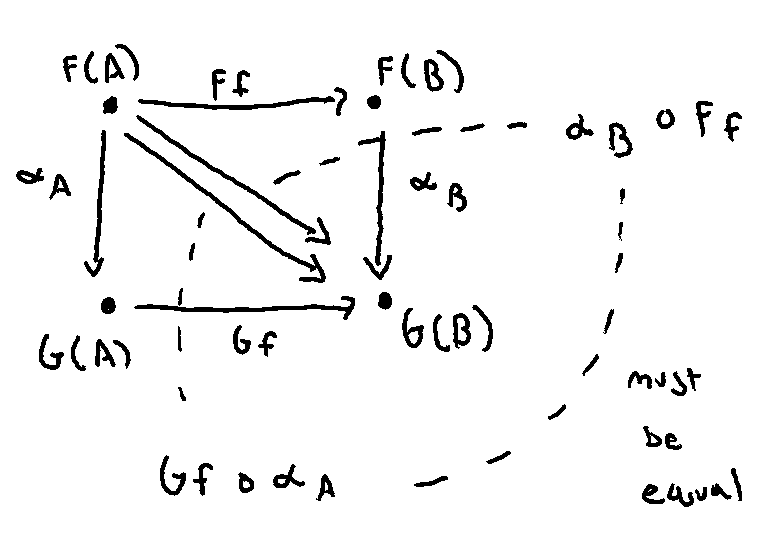 Maybe that’s why natural transformations are rare? There might be many morphisms between F(A) and G(A) and F(B) and G(B), but only a select few (or none) which cause their compositions to coincide.

For more on commutative diagrams, Tai-Danae Bradley has a post dedicated to the topic.

I still don’t quite have the foundation to grok the “lax” and “tensorial strength” bits (I will, some day). Yet, seeing applicatives as monoidal always felt out of reach.

They’re often introduced with the pure and apply duo (sketched out below for Optional).

(An aside, it finally clicked that the choice of “applicative” is, because, well, it supports function application inside of the functor’s context.)

And then, coincidentally, I recently asked:

is there any special terminology around types that support a zip in the same way functors have a map and monads have a flatMap?

To which, Matthew Johnson let me in on the secret.

zip is an alternate way to formulate applicative

That makes way more sense and sheds light on why Point-Free treated map, flatMap, and zip as their big three instead of introducing pure and apply.

I can only sort of see that apply implies monoidal-ness (pardon the formality) in that it reduces an Optional<(A) -> B> and Optional<A> into a single Optional<B>. However, the fact that they contained different shapes always made me wonder.

zip relays the ability to combine more readily. “Hand me an Optional<A> and an Optional<B> and I’ll give you an Optional<(A, B)>.”

Yesterday, I finally got around to defining apply in terms of zip to see the equivalence.

Funnily enough, Brandon pointed me to exercise 25.2 which asks exactly this.

One removes detail (e.g. Publishers.Zip -> AnyPublisher) and the other strips structure, leaving the underlying set behind (a monoid or group being mapped onto its base set).

Wonder if there’s a way to visualize this by considering eraseToAnyPublisher as a sort of forgetful endofunctor into a subcategory of Swift (hand waving) that only contains AnyPublishers?

20 Oct 2019 Folks often refer to the component of a functor’s “polarity.” “The input is in the negative position.” “The output is positive.”

And that made me wonder, is there a, well, neutral polarity?

Maybe that’s when a component is in both a negative and positive position, canceling one another out.

A is in a negative position? Check. Let’s add it to the positive spot.

This is our old friend, Endo! At the bottom of the file, I noticed imap and asked some folks what the “i” stood for. Turns out it’s short for, “invariant,” which reads nicely in that both co- and contravariance net out to invariance.

19 Oct 2019 Learning category theory often involves patiently sitting with a concept until it—eventually—clicks and then considering it as a building block for the next1.

Grokking natural transformations went that way for me.

I still remember the team lunch last spring where I couldn’t keep my excitement for the abstraction a secret and had to share with everyone (I’m a blast at parties).

After mentioning the often-cited example of a natural transformation in engineering, Collection.first (a transformation between the Collection and Optional functors), a teammate asked me the question heading this note:

What makes a natural transformation, natural?

I found an interpretation of the word.

Say we have some categories C and D and functors F and G between them, diagrammed below: 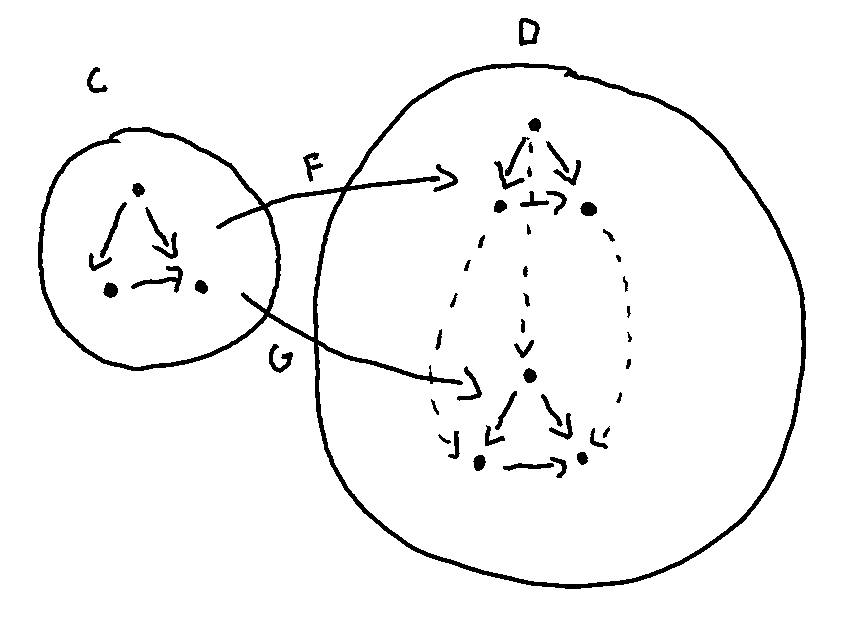 If we wanted to move from the image of F acting on C to the image of G, we have to find a way of moving between objects in the same category.

The question, rephrased, becomes what connects objects in a category? Well, morphisms!

Now, how do we pick them? Another condition on natural transformations is that the square formed by mapping two objects, A and B connected by a morphism f, across two functors F and G must commute.

The definition, the choice of morphisms, seems to naturally follow from structure at hand. It doesn’t depend on arbitrary choices.

Tangentially, a definition shaking out from some structure reminds me of how the Curry–Howard correspondence causes certain functions to have a unique implementation. Brandon covered this topic in a past Brooklyn Swift presentation (timestamped).

For more resources on natural transformations:

17 Oct 2019 There are many prefixes placed in front of the word “morphism”—here’s a glossary of the ones I’ve seen so far:

Getting an intuition around why we can call contramap a pullback

(The analog for the Haskell peeps is Contravariant’s contramap requirement.)

However, the name contramap isn’t fantastic. In one way it’s nice because it is indeed the contravariant version of map. It has basically the same shape as map, it’s just that the arrow flips the other direction. Even so, the term may seem a little overly-jargony and may turn people off to the idea entirely, and that would be a real shame.

Luckily, there’s a concept in math that is far more general than the idea of contravariance, and in the case of functions is precisely contramap. And even better it has a great name. It’s called the pullback. Intuitively it expresses the idea of pulling a structure back along a function to another structure.

I had trouble getting an intuition around why contramap’ing is a pullback, in the categorical sense and here’s why (mirroring a recent Twitter thread):

@pointfreeco—Hey y’all 👋🏽 I’m a tad confused when it comes to grounding the canonical pullback diagram with types and functions between them. (Pardon the rough sketch hah, I forgot my LaTeX and this was more fun. 😄) /1

Pullbacks, generally, seem to give two morphisms and objects worth of freedom—f, g, X, and Y—whereas in code, we almost always seem to pullback along one [path across] the square. /2

Do y’all call this operation pullback because there isn’t a restriction preventing f from equaling g and X equaling Y (collapsing the square into a linear diagram)? /3

Yesterday, Eureka Zhu cleared up my confusion on why we don’t take the upper path through pullback’s definitional diagram:

Hand-waving past Hask and Swift not quite being categories, we reason about them through the category Set.

And Zhu points out that a pullback in Set requires us to equate two functions, f and g in the diagram above, for a subset of inputs and that’s undecidable in programming.

How do we get around this? 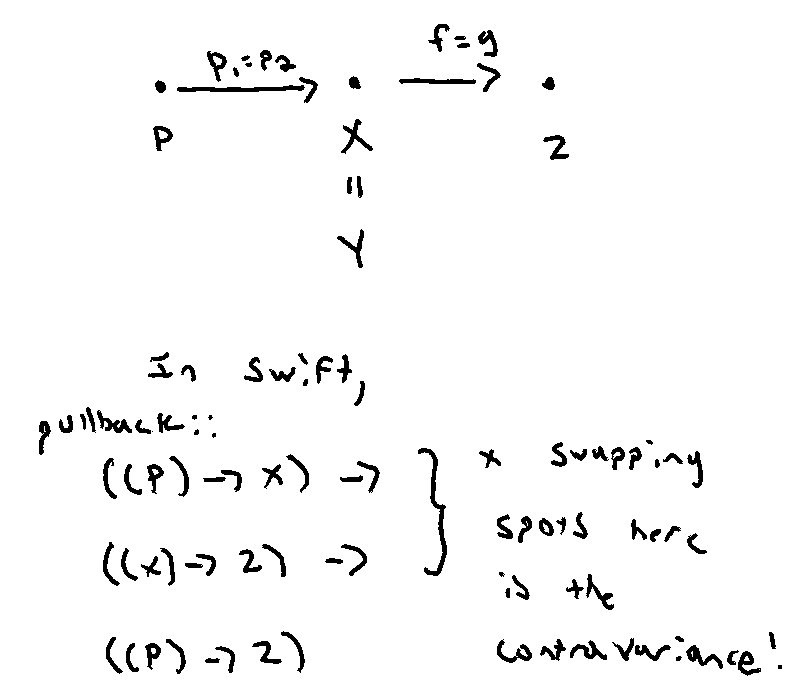 Since pure functions equal themselves, we can sidestep that undecidability by collapsing the diagram. Wickedly clever.

That’s how pullback’s flexibility allows us to consider contramap as a specialization of it.

The former is often helpful when staying point-free with functions that are close, but not quite the right shape you need. e.g. mapping unapplied method references:

Let’s try to make this work.

First, let’s flip the first two arguments and then address the rogue ().

Getting closer—this is where zurry can zero out the initial Void for us.

Wicked, now we can return to our original example:

Dually, unzurry shines when you’re working against a () -> Return interface, that isn’t @autoclosure’d, and you only have a Return in hand. Instead of opening a closure, you can pass along unzurry(yourReturnInstance) and call it a day.

The Point-Free folks link to Eitan Chatav’s post where he introduced the term and shows how function application is a zurried form of function composition (!).

(The question, rephrased for Combine, involves swapping in Publisher.handleEvents and .sink, respectively.)

do (handleEvents) gives you a hook into a sequence’s events without triggering a subscription, while subscribe (sink) does the same and triggers a subscription—a way to remember this is the former returns an Observable (Publisher) and the latter returns a Disposable (AnyCancellable).

So, when should we use one over the other?

In the past, I’ve always placed effectful work in the do block, even if meant an empty subscribe() call at the end of a chain.

And I’m starting to change my mind here—putting that sole do work in the subscribe block makes the chain more succinct (there are definitely cases where it’s cleaner to use both to sort of group effects, e.g. UI-related versus persistence-related).

I dug up an old bit from Bryan Irace in an iOS Slack we’re a part of that puts it well:

if all you’re doing is performing the side effect, just do that in your subscribe block